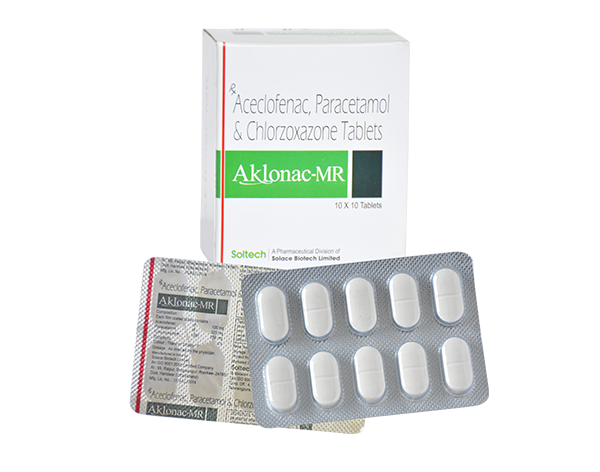 Aceclofenac is a phenylacetic acid derivative which produces its action on inflammatory mediators. It is a glycolic acid ester of diclofenac.

Paracetamol is also known as acetaminophen and is widely used as over the counteranalgesic and anti-pyretic. It is a mild analgesic which causes relief in mild headaches and other aches and pains. In combination with other drugs like opioid analgesic,    paracetamol is used in the management of post surgical pain and severe pain.

Chlorzoxazone  is centrally acting muscle relaxant which reduces pain and discomfort of the pain. It mainly acts on spinal cord by depressing reflexes.

It is a NSAID which produces its action by blocking COX-1 which is involved in inflammatory processes. This inflammatory mediators produces response to any injury    and cause pain and swelling. It is a glycolic acid ester of diclofenac.

It inhibits the synthesis of prostaglandin synthesis by competing with arachidonic acid for the active site of COX.

It prevents the release of histamine and inhibits degranulation of mast cells. It also reduces the inflammatory leukotrienes. It produces its action by inhibiting calcium and potassium influx which causes neuronal inhibition.

After oral administration it is well absorbed in the body.

About 99.7% of the drug is bound to plasma protein. It produces its action  by concentrating in synovial fluid. The drug is metabolized in liver as 4-hydroxyaceclofenac.

It is excreted as conjugated metabolites through urine.

It has rapid and complete absorption

The protein binding of the drug is about 25%, it undergoes glucuronidation in liver.

About 80% of acetaminophen is excreted in the urine after conjugation and about 3% of the drug          is excreted unchanged.

After administration the drug is well absorbed in the body. Chlorzoxazone acts primarily at the level of the spinal cord and subcortical areas of the brain where it inhibits multisynaptic reflex arcs

It is well distributed in the body with the blood serum levels attained within first 30 min and peak levels achieved in 1 to 2 hrs after oral administration.

The drug is excreted in conjugated form as the glucuronide form in urine.