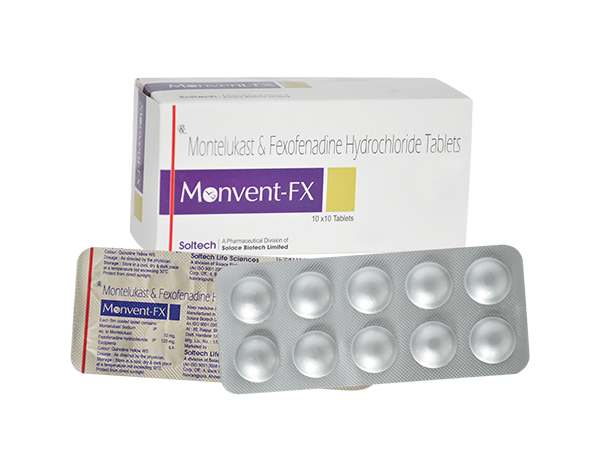 Montelukast is a leukotriene receptor antagonist (LTRA). It is mainly used for the treatment of seasonal asthma and symptoms associated with seasonal allergies. It can be taken with or without food. It is also used in many conditions like exercise induced bronchospasm, allergic rhinitis or urticaria.

Fexofenadine is third generation anti-histamine which has a ability to pass through blood brain barrier. It also causes sedation.

It produces its action by competing with free histamine for binding at H-1 receptor which is present in GI tract and bronchial smooth muscle. This  causes blocking of actions of endogeneous histamine and produces relief in negative symptoms caused by histamine.

It gets rapidly absorbed by the body. The mean plasma concentration is achieved in 3 to 4hrs. The oral bioavailability is about 64%. The bioavailability of the drug is not influenced by meals.

About 99% of the drug is bound to plasma proteins. The volume of distribution is about 8-11 liters. The metabolism of the drug is liver by CYP3A4, 2C8 and 2C9.

The plasma clearance of montelukast is 45ml/min. Most of the drug is excreted through bile. The plasma half life is 2.7-5.5 hrs.

After oral administration it is about 33% absorbed in the body

The drug is excreted through feces and urine. The elimination half life is 14.4hrs